(ed note: Rob Garitta asked a question about the minimum energy requirements for some kind of paragravity hover vehicle, like Luke Skywalker’s landspeeder or a Traveller air/raft. Not the energy to move around, just the energy to hover in place.)

LUKE CAMPBELL: If you suspend something above the ground and it is not moving, it requires no energy at all to keep it there. The speed of the object is not changing, it is not gaining kinetic or potential energy, so no energy is needed to keep it in place.
For example, I am currently using a device that exerts a repulsive force on the ground to suspend me about half a meter above the ground. It is called a chair. It requires no power to operate.
Obviously, you can suspend things using less efficient methods, like quadrotor drones, which must spend power to continually shoot streams of air downward (accelerating the air, and giving it kinetic energy, which comes from the drone’s battery).
Now if you move the object around, it will require energy to speed it up so that it can get someplace else (and to fight aerodynamic drag), or to raise the object against gravity. Conversely, in principle lowering the object or slowing it down can get you that energy back (minus inefficiencies, and you’re not going to recover any energy lost to drag forces or friction).
I assume you’re talking about some kind of magic repulsor beam or force-screen levitator car or some such. In principle, there’s no reason that these need to consume power to keep something hovering in one spot — especially if it acts by directly pushing from the levitated object down to the ground. Of course, we don’t actually have any real-life examples of levitator rays to compare to.

There may be additional energy losses associated with such a technology — ionization of the air*, or excitation of energetic modes not related to creating bulk forces, or modulation of the field to overcome dynamic instabilities through active control, or radiation of orgone waves, or who knows what. But none of this follows from the fundamental physics of the situation.

ROB GARITTA     Luke Campbell Do you have any idea how to calculate the power needed to lift a mass with my magic levitator ray?

LUKE CAMPBELL:     Rob Garitta The power to lift a mass (absent inefficiency) is easy — multiply the mass of the object by the distance lifted, and then multiply that by the local gravity.

(ed note: meaning the following equations are for a device with 100% efficiency. Since there is no such thing as 100% efficiency, you should make a correction. If you say the device is only 75% efficient, the efficiency factor is 0.75. The power factor is 1 / 0.75 or 1.33. Multiply the equation’s power required by 1.33 to get how much power it really uses.)     For example, on Earth the gravity is 10 m/s2 (actually 9.8 m/s2, but rounding to 10 is easier for quick calculations). If your hovercar has a mass of 1500 kg, and is currently floating at an altitude of 40 meters, and you want to lift it to a height of 60 meters, then the energy required to do so is:

Note that if you drop in altitude, that potential energy that you added is somehow.

(ed note: you take the final altitude and subtract the initial altitude. If the final altitude is less than the initial, the object is dropping in altitude not lifting in altitude. This means the altitude changes will be negative. Which means the energy required will also be negative, signifying that the hovercar’s batteries will be gaining energy instead of losing energy.)     You can just turn it into kinetic energy, which gives your hovercar speed — but if you brake with the levitator ray you will be doing work on the ray’s field, which will be adding energy to the ray. You can use this to, for example, recharge the battery.

G can be looked up on Wikipedia (6.67408×10-11), and M and r0 for ground level for any of the planets in our solar system can also be found on Wikipedia (the entry for Earth, for example, lists all the relevant planetary parameters in the sidebar).
If you speed up from a speed of v0 to a speed of v, this also requires an energy of 0.5 * m * (v^2 – v0^2). Likewise, slowing down somehow turns that energy into another form, which may just be dissipated as heat (as with friction brakes, or drag-producing aerodynamic surfaces), but might be used to recharge the battery (like with electric cars, that run their motors in reverse to work as generators).

There are certainly levitation methods that use a lot of power. An extreme example is lifting something by light pressure, which requires a power of 3 GW to lift 1 kg against Earth’s surface gravity. (Although if you re-use the light, by reflecting it back and forth between two mirrors, for example, you can reduce the power level. If you get on average 1000 reflections per photon, then your power level is down to 3 MW per kg. You still have a nasty death ray ready to incinerate anything between the levitated thing and the emitter station, though). Sonic levitation (where you have to continually run a speaker) or rotorcraft (helicopters, quadrotor drones) also continually use power.
On the other hand, magnetic levitation does not intrinsically use power to keep something suspended. Active control circuits will require some dissipation (probably because they use some electromagnets for control, which have resistive losses). For superconductive levitation, you will need power to run the compressors that get you your liquid nitrogen (unless you have room temperature superconductors in your setting, or if you are working in a naturally cryogenic environment like Pluto, in which case you don’t need any power).
And yes, if you lift yourself up above the atmosphere and then turn off your levitator ray, you will drop like a rock unless you also add enough speed to keep in orbit. Note that the energy to add orbital speed is quite a bit more than the energy to just lift you up above the atmosphere.

Lucas Matson for Laboratory of Aether Physics. From Dr. Luke Campbell in a private Google Plus thread (2017), projectrho.com. 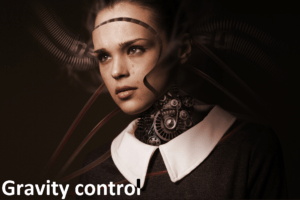