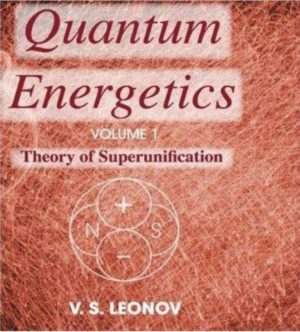 QUANTUM ENERGY
No one knows how to bend the empty space, but if the space is really filled with something, then there are some options about the nature of gravity. I propose to consider the theory of Superbadiste V. S. LEONOV. Details in Russian can be found here:
English available book V. S. LEONOV’s “QUANTUM ENERGY”, eng.edition, Cambridge, 2010
According to this theory, the space is densely filled with the smallest particles — quantons and is a superdense and superelastic medium. Quanton consists of four weightless (without mass) monopole charges: two electric (+1E and-1E) and two magnetic (+1g and-1g). The calculated diameter of the quanton is very small-about 10-25 m.
In such a medium, it is possible to change its density, that is, the concentration of quantons per unit volume can change, or, as Leonov writes, the quantum density of the medium changes.
Spherical deformation of the quantum density of the medium in the vicinity of an elementary particle and determines its mass. Leonov considers mass as the energy of spherical deformation of quantized space-time, and hence mass is a secondary formation.

Answer all questions
If as a result of any processes changes the quantum density of space, respectively, there are forces of gravity or antigravity. The processes that occur with a large release (or absorption) of energy, create appropriate changes in the gravitational field in their vicinity, which was discovered by the device described in the article. This is evident in the experiments with the Kozyrev’s torsion weights. Similar phenomena can be found in the vicinity of launching heavy launch vehicles, powerful explosions and especially in nuclear explosions.
Einstein approached the problem of gravity from a purely mathematical point of view and presented gravity as a curvature of space, which can be described by Lobachevsky’s spheres of different curvature, strung one on another. Eventually got a theory devoid of physical meaning.
Leonov’s theory of Superunion has a specific physical meaning, very nicely solves the problem of mass, unites all four fundamental forces of nature and resolves many dark places of modern physics.