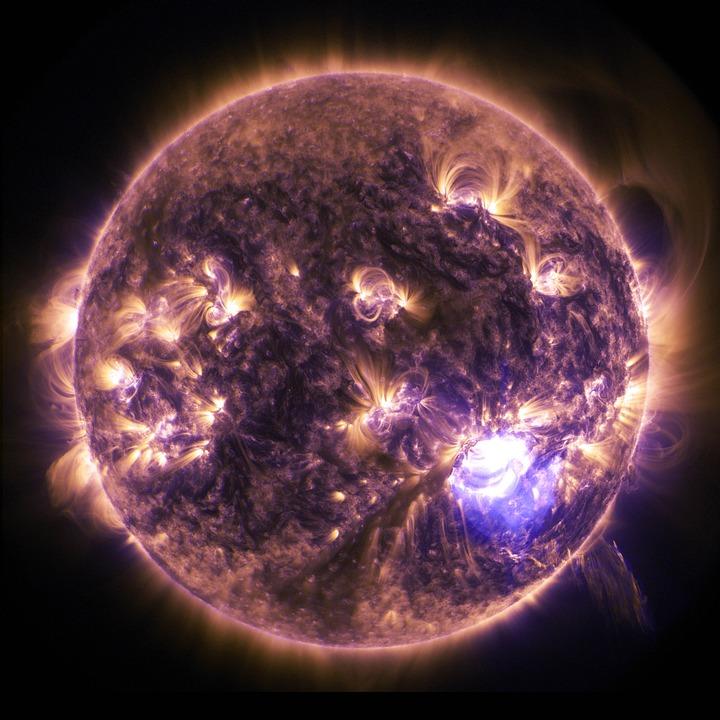 Section 1: What is antigravity?

Einstein’s “cosmological constant,” a postulated minute repulsion force necessary to account for the absence of universal gravitational compression was not completely rejected until 1999 when it was discovered that it was not a constant at all, but must have varied over the universe’s life. Equations didn’t allow for the acceleration of the newborn universe accurately without increasing the cosmological constant.

Also that year, it was determined that the beautiful, unexplained, axial jets of matter and x-rays and gamma rays observed from black holes, neutron stars and galactic centers were the result of a repulsive force arising perpendicular to their rotation. [see http://science.msfc.nasa.gov/newhome/headlines/ast11jun97_1.htm for info on these jets. Note that the jets appear to turn on and off as one would expect if matter passed over the axial repulsive fields variably] The repulsive effect is so strong from galactic centers that if our sun were placed in the repulsive field, its entire mass would be accelerated almost instantly to a speed quite near to the speed of light. Not only that, but the light emitted by the sun would be compressed to x-ray and gamma-ray energies as it traveled down the repulsion gradient. This wavelength compression happens in an opposite fashion to the wavelength expansion that is theorized to occur as light nears a massive gravitational source. Soon after these discoveries were described, the “cosmological constant” was discarded and equations describing the antigravitic effect substituted.

In most situations, the antigravity force is insignificant, due, in part, to the perpendicularity of the effect and also because the gravitational forces resisted are normally minute. This is why the “cosmological constant” was set so low and often questioned. However, a black hole’s gravitational pull is hardly small. It’s this incredibly strong gravity that causes the huge antigravitic displays from black holes as their cores rotate and resist further compression.

Descriptive equations of antigravitic interactions are only simple in two dimensions. It’s impossible to predict the repulsive effect generated by the complex and variable rotation of our sun. Suffice it to say that repulsion is strongest from the axis and negligible from the plane of rotation. It is this repulsive effect that accounts for the planarity, or disk-like shape of our own solar system and the repulsion of enough matter to form our Oort cloud. It is also this effect that accounts for the planarity of a black hole’s accretion disk and even the planarity of galaxies.

Section 2: How was antigravity harnessed?

No discussion of antigravity would be complete without discussing the discoveries that allowed humanity to harness the repulsive force. In 1999 again, it was discovered that the antigravity effect could be duplicated in a laboratory by spinning atomic nuclei at very high speeds. An atom’s nucleus is ultra-dense, not so unlike a tiny black hole. Because nuclei rotate fairly stabily and without friction, it is possible to accelerate their rotation to their maximum speed and produce very strong antigravitic effects.

So, how does one make nuclei rotate? It was discovered that certain nucleic geometries reflect, to a small degree, the movements of nearby electrons. The elements that exhibit such geometries have an odd number of protons and an even number of neutrons. In such atoms, the protons are not uniformly dispersed throughout the nucleus. Instead, one side of the nucleus is slightly more positive than the other. Elements that have this unbalanced nuclear charge are called electro-rotational elements. They exhibit a slight natural antigravitic effect which may be deduced by observing their atomic radii. The atomic radii of electro-rotational elements are significantly smaller than expected due to the repulsive effect generated by neighboring atoms. The electro-rotational element with the most massive nucleus is Bismuth, element 83. Its nucleus has the greatest gravitational pull and therefore can demonstrate the largest antigravitic effect when spun.

It was discovered that a sufficient electrical charge passed down a micro-thin ribbon of Bismuth sped and aligned the rotation of the Bismuth nuclei so that the axis were aligned perpendicular to the electrical flow. It was also discovered that micro-layers of Bismuth exhibit near superconductive properties at room temperature. This near superconductivity happens as the nuclei spin at very high speeds and act as miniature flywheels, guiding the electron flow and reducing electrical resistance. [Note from Joshua 4/24/99: my latest findings seems to suggest that micro-filaments and micro-layers of Bismuth exhibit true supeconductivity at room temperature. See the info on the first page of my website.]

The first atomic antigravitic device was constructed in 1999. My, that was a busy year! The device was simply a 10 centimeter wide ribbon of Bismuth half a kilometer long and an average of 3 microns thick. It was coiled around a hollow copper core with a similar, 25-micron thick dielectric ribbon coiled around the core and between each Bismuth layer. The free end of the bismuth ribbon was grounded. When a high-voltage charge was applied to the copper core, the device punched through the ceiling and roof of the lab at a speed that was later estimated to be around Mach 8.

The antigravity platforms that we see every day use three standard antigravity generators of this type mounted at angles around an axis with 120 degrees separating each. Other designs were explored. One of the most successful ideas was to apply the Bismuth and dielectric layers directly to the exterior surface of a craft. This antigravitic “skin” slightly lowered manufacturing costs and allowed easier repairs. It also allowed us to explore our solar system with a greater safety factor and at higher speeds due to the protection from micro-meteorites offered by the repulsion field that surrounded the craft. [To see some fragments of actual antigravitic “skin” and learn about them, visit http://www.artbell.com/rosreprt.html ]

The first shape to get its antigravitic skin was the cigar shape. It was coated with the successive Bismuth and dielectric layers. When a sufficient high-voltage charge was passed across the Bismuth micro-layers from one end to the other, the repulsive field was generated tangential to the “skin” and perpendicular to the axis plane, giving a nice, stable lift. With the addition of two standard antigrav generators (one at each end of the cigar) maneuverability was achieved.

The traditional “flying saucer” shape was explored next. It was coated similarly and charged from top to bottom. Again, the repulsive field was generated tangential to the “skin” and perpendicular to the axis plane. Sitting on the ground, it repulsed laterally, providing zero lift. To direct the repulsion force from the lateral, the electrical flow needed to be made to travel around the axis instead of taking the shortest, fastest route between poles. The closer the spiraling of the electron flow, the closer the repulsive field aligns with the axis plane and therefore repulses more up and down. This spiraling was accomplished first with a spirally wound core and then more efficiently with a winding just deep of exterior surface. With this design, only one standard antigrav generator mounted axially is needed to provide maneuverability. [Note from Joshua 4/24/99: the addition of a ferrous layer near the winding, may or may not increase efficiency. I don’t know. Using pulsed, high voltage DC, it’s possible that in such an arrangement, nucleic rotation would be affected by both the electrical flow and the magnetic field.]

There are limitations to these craft arising from the fact that all the repulsive forces are directed tangential to the surface and never reach the interior of the craft. This limited the ac celeration and deceleration to that which a human body could withstand. Then somebody had a brilliant idea. Why not put the occupants outside, on top of the craft. This way, the repulsion forces generated would, to a large degree, counter-balance the inertial forces on occupants as the craft accelerated. This is why we see domes on the top of early designs. Eventually, it was discovered that by using an exterior surface that had a sine wave ripple instead of a smooth surface, the repulsive effect could be directed into the interior.

Antigravity has allowed us to safely explore our solar system and to send explorers at high speeds to nearby stars. It gave us unlimited, clean, electrical power. It brought humanity together as nothing had before and caused us all to think seriously about our collective future. It eliminated much of our pollution and allowed our planet to begin to heal. It also made everyone look carefully at the magnificent design of the Universe and consider that it may have been intelligently created.

A personal statement from the author

And now, I would like to personally and sincerely apologize to the individuals, governments and corporate entities that may have to change their plans, and/or accept financial and other losses due to the release of this knowledge. However, I believe that it is quite proper now to release this information and allow our society its rightful technological leap. For if antigravity itself does not allow super-efficient electrical generation due to the Laws of Conservation, it certainly does provide the means to supply our entire electrical requirements. For, with simple antigravity platforms high in the atmosphere and very long wires reaching down to the ground, as Tesla proposed, we may siphon off as much electricity as we like from our atmosphere, which is continually being recharged anyway.

In order to offset the negative a bit, I presently offer my ideas, designs, and theories, indeed my antigravitational technology, and my ability to profit from it – to every individual, government, and corporate entity. But only if we agree to one condition. We have to share it. And we have to help those whose lives are disrupted due to it. Oh, that’s two conditions. Well, we should do both, but we must share.

Oh, it will be weird to see strange things floating around. I wonder if they’ll make the horses bolt?

For more information on this and my other research, or to comment on this paper, please contact me at:

Joshua Gulick
69 and One Half N. Franklin Street
Delaware, OH 43015

or you may use my e-mail address:
joshua.gulick@cheerful.com

But, I would rather you use the bulletin board on my site:
http://www.freez.com/joshua

I have never been employed as theoretician, but any employment offers (joint research, perhaps – I’ll work cheap!) or other proposals may be sent to the same address(es). If you would like to be involved in the next stage of my research, let me know.

Thanks and God bless,

P.S. If you think it is worthwhile, please forward this to others who might appreciate it. Include your comments, too, if you would. You may copy, redistribute, publish, or do whatever else you want with this paper; I reserve no rights, but please acknowledge my contributions.