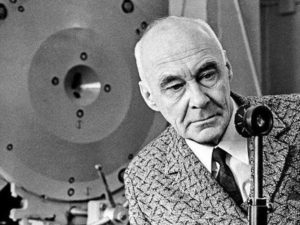 Nikolai Aleksandrovich Kozyrev – astrophysicist, doctor of physico-mathematical sciences (1947). He graduated from the Physics and Mathematics Faculty of Leningrad State University in 1928, worked at the Pulkovo Observatory in 1947-79 and at the same time at the Crimean Astrophysical Observatory in 1947-58.

The main scientific works of N.A. Kozyrev devoted to the physics of stars, the study of the planets and the moon.

In 1934 Kozyrev developed the theory of extended atmospheres of stars and established a number of features of the radiation emerging from them. This theory was generalized by S. Chandrasekhar and received the name of Kozyrev’s theory – Chandrasekhar.

“They accused him of trying to hijack the Volga River. That is, literally to steal from Russia – to the West. Kozyrev later said: “… when the prosecution was read, I laughed. But when the sentence was announced, it was no laughing matter. ”

His mother and sisters were sent into exile. They were offered to abandon their son and brother in exchange for non-refoulement: they did not do this; as the wife, who was in the Siberian camps.

Until May 1939, N. A. Kozyrev was serving a prison sentence in the Dmitrovsk-Orlovsky city prison, then transferred to Norillag NKVD (Norilsk, Dudinka). From January 1940, he was transferred to the Dudinskaya permafrost station, where he worked as a surveyor, deactivated since spring 1940, and in December of the same year he was appointed head of the permafrost station. On January 25, 1941, allegedly for hostile agitation among prisoners, he was convicted again, for another ten years in prison. According to N.A. Kozyrev, some of the accusations were as follows.

The defendant is a supporter of the idealistic theory of the expansion of the universe;

He considers Yesenin (perhaps Gumilev) a good poet, and Dunaevsky – a bad composer;

He stated that “being does not always determine consciousness”;

I do not agree with the statement of Engels (“The Dialectic of Nature”) that “Newton is an inductive ass.”

After the trial, he was transferred to Norilsk and assigned to work at a metallurgical plant as a heat control engineer. The Supreme Court of the RSFSR reconsidered the judgment against N. A. Kozyrev, and he was sentenced to “capital punishment”, but a month and a half later, the USSR Supreme Court overturned the latter and returned the previous decision. In the spring of 1943 he was transferred to work at the Geological Administration of the Norilsk Combine as an engineer-geophysicist. Until March 1945, he worked as a prospecting expedition on Lake Khantai and was the head of the Northern Magnetic Prospecting Unit of the Lower Tunguska Geological Expedition. On December 14, 1946, at the request of fellow astronomers, he was released on parole as a talented scientist, and on February 21, 1958, he was fully rehabilitated.

March 10, 1947, three months after his release, he defended his doctoral dissertation on the topic “Theory of the internal structure of stars as the basis for the study of the nature of stellar energy.” The official opponents of the dissertation were the Cor. Academy of Sciences of the USSR V.A. Ambartsumian, prof. KF Ogorodnikov and prof. A. I. Lebedinsky.

He developed the theory of sunspots under the assumption that the spot is in radial equilibrium with the surrounding photosphere.

Kozyrev was an experienced and skilled experimenter and observer.

In 1953, he found emission bands in the spectrum of the dark part of the Venus disk, two of which were attributed to molecular nitrogen.

In 1958, N.A. Kozyrev received spectrograms of the Alfons lunar crater, indicating gas outflow from the crater’s central hill and volcanic phenomena on the Moon, for which he was awarded the Gold Medal of the International Academy of Astronautics (1970).

In 1963, he discovered hydrogen in the atmosphere of Mercury (based on a comparative study of the contours of the hydrogen lines in the spectra of Mercury and the Sun).

Based on the analysis of the Hertzsprung-Russell diagram N.A. Kozyrev came to the conclusion that, contrary to generally accepted ideas, the energy release in stars cannot be explained by thermonuclear reactions.

The scientific activity of Nikolai Aleksandrovich Kozyrev was marked by two major achievements. This is the discovery of a new kind of physical interaction and the development of an original scientific picture of the world in which the passage of time appears as a physical process that ensures the maintenance of life in the universe.

According to his theory, celestial bodies (both planets and stars) are machines that produce energy, and time serves as the “raw material for processing”. By virtue of its special physical properties, it is able to prolong the activity and viability of an object: the longer an object exists, the more it acquires the ability to continue to exist.

This theory led him to study the physical properties of time and to establish a connection between time and energy, manifested in all celestial bodies, large and small, and resulting from the constant action of the universal “low-temperature source.” He tried to back up his theoretical studies with astronomical observations and a laboratory experiment. Thus arose the “theory of Kozyrev’s time”, which he first described in his book “Causal or asymmetric mechanics in linear approximation.”

Kozirev’s name is an asteroid and a crater on the moon.