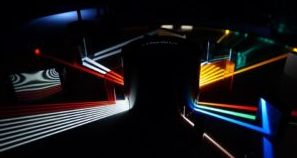 Antigravity is a concept that still people consider a science-fiction utopia.
Information on antigravity research has begun to appear in the media lately.
In documents preserved in ancient Sanskrit in ancient India over 15,000 years ago, an anti-gravity propulsion method is presented as: a centrifugal force strong enough to counteract all gravitational pull.

Podkletnov claimed a 2% weight reduction. Unfortunately the experiment could never be repeated.

Fig. 1 MAGIC Engine. Scheme of principle
The MAGIC Engine is a device by which rotating, cancels 100% of the weight of the masses.

This method was applied when designing, experimenting and making the centrifugal inertial anti-gravitational engine.

Fig. 2 MAGIC Engine. Experimental Model
MAGIC Engine uses a classical electric motor and a drive system to rotate the weights (batteries, fuel, hydraulic oil, etc. ) of the device at a certain angle and a certain speed so that weights should “float”. A powerful centrifugal force is generated, which totally cancels the gravitational force of the rotated masses.

By equipping cars, motorcycles, drones, helicopters, planes, missiles, etc., with this MAGIC Engine, a reduction of their weight, a decrease of their fuel consumption, as well as an increase of their payload are achieved. The MAGIC Engine has the following advantages:
– a simple construction and cheap maintenance
– high safety in operation
– there is no danger of fire or explosion when operating
– low noise in operation (maximum 10 dB)
– it becomes operational in a short time (10 sec)
– it does not produce turbulence or running air
– a technological reduced impact on industry when implemented in production
– low sale price.
Some general possible uses of different equipped systems with MAGIC Engine are presented in the following pictures.

Fig.6 Helicopter
If MAGIC Engine is used, the weight of the helicopter can be reduced up to 30%.

Fig.7 Passenger Airplane
If a passenger airplane weighing 300 tons, uses MAGIC Engine will reduce the weight of the plane and its fuel consumption by about 30%. It will also increase its payload.

Fig. 8 Spaceship
A spacecraft weighs 2000 tons, 80% representing its fuel. If we equip it with MAGIC Engine, the weight will be reduced as well as its fuel consumption, while its payload will be increased.

I am a Romanian Dr. Engineer , I am the author of 11 patents in the field of Welding and Cutting of materials. My last invention , was tested and built , an antigravitational engine that can reduce the weight for a body in circular motion up to 100% for rotating masses.
The engine is simple to build, use, with high operating efficiency.
I have found a technical solution for lifting objects using centrifugal forces.

With this device I can reduce weight by 50% for: electric car, airplane, helicopter, drona, etc.

Please publish this invention on your site, so I can talk to potential inventors.